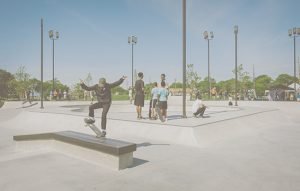 The Tony Hawk Foundation spends a lot of time studying skateparks. One thing that we’ve noticed is that the size and density of a community has a big impact on what kind of challenges a skatepark group is likely to face there.

The Tony Hawk Foundation has awarded skatepark grants to  631 communities across the United States. 56% (354) of these awards have gone to communities with fewer than 10,000 residents.

For general comparison, cities have higher real-estate values. Land to produce new parks is more likely to be scarce in a city than in a small town. When there is available land in a city, a skatepark group is more likely to encounter other groups that are also vying for access to that public space. Sometimes these competing interests align well with skateparks and sometimes they don’t. 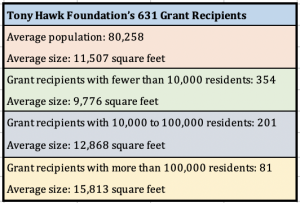 While there are exceptions to every rule, the costs to produce a skatepark in a city like Seattle or Austin is going to be higher than those same kind of projects in a rural town surrounded by county land. This is often a difficulty for the advocacy group that is tasked with significant fundraising expectations by local government.

On the other hand, raising skatepark funds in a city is often easier because the pool of potential donors is more diverse and (odds are) wealthier. In a city, advocates are much more likely to find organizations that are sympathetic to their needs. In a rural community, advocates often find that they have “asked everybody” and are still far short of their funding goals.

Small towns have their advantages over cities in site selection. It’s a lot easier to find a place for the skatepark that everyone can get to in a little village. Even a skatepark near the outskirts of can be easily reached by foot if the town is just a dozen blocks.

A single skatepark can easily meet the needs for an entire small community. All of the skateboarders, BMX riders, and scooter riders in a town will be sharing the space. In a city, a skatepark will mostly serve people from the immediate neighborhood. This presents another fundraising challenge; the advocacy group in a city is raising funds for a facility that will not fully meet the community’s needs. A large city may need a dozen skateparks or more, and each one must be advanced through the process from scratch. In a small town, by comparison, the “one” skatepark can be a singular solution to a simple problem. 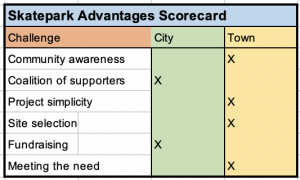 Suburban communities present an interesting collision of opportunities. The suburbs are often the wealthiest enclaves in a greater metropolitan area, and skateboarders tend to flock to downtown districts due to the dense architectural spaces that are abandoned on the weekends. Suburban parents are often quick to support skateparks as a means of providing for their youth and keep them recreating locally. Suburban space is not as competitive as downtown, so it’s generally easier to find a home for the new skatepark. In fundraising and site-selection, the suburbs have a clear advantage.

If you would like to learn more about THF’s work, please drop us a line to start the conversation!