Motor City skaters get help from Tony Hawk Foundation to rebuild their neighborhood. 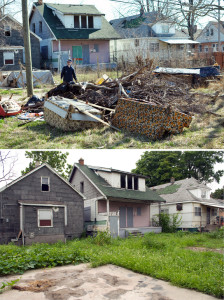 3/27/13 (Oceanside, CA) – The Ride It Sculpture Park began as a renegade attempt to bring life back to a withering Detroit community by building a skatepark. But the skaters and artists responsible for it have proven the effectiveness of their efforts, and now have the backing of the Tony Hawk Foundation to continue expanding what has become a shining example of the Motor City’s renaissance.

Attracting nationwide press and accolades for the impact it’s had in North Central Detroit, Ride It Sculpture Park is part of an effort by the nonprofit Power House Productions to develop an artists’ colony and help reverse the trend that’s seeing entire neighborhoods abandoned and blighted. With several adjacent homes housing artists and studio space, the expanding skatepark will weave between, and even through, several of the structures. The Power House Neighborhood, as it’s become known, has attracted visitors and visiting artists from around the world.

The vision and impact of the project were clear to the Tony Hawk Foundation Board Of Directors, which this month voted to award Ride It Sculpture Park $30,000 (which includes a $5,000 personal contribution from THF Board Member Kevin Rose). The funds will help continue the construction of the sprawling skatescape along East Davison Street, which has already become an attraction for local youth.

“Being recognized by the Tony Hawk Foundation, a name synonymous with the highest level of the sport, is a point of pride for the neighborhood,” said Mitch Cope, Co-Director of Power House Productions. “These kids just can’t believe it.

“Ride It Sculpture Park has always been a very personal project for us, in part because it mixes aspects of our youth that were such big influences—skateboarding and art—and also because it has the greatest potential for impact in our neighborhood of any of the projects we’ve done. It’s a focal point for creative, social activity that is free and open to all.”

“We’re proud to support the Ride It Sculpture Park,” said Tony Hawk. “It’s exactly the type of grassroots effort that we hope to see more of in cities like Detroit. I know the surrounding communities will appreciate the positive impact the skatepark project will have.”

The Detroit award was part of a series of grants issued this month by the THF Board Of Directors. Other recipients include similarly inspiring skatepark projects in New Orleans, Louisiana; Boise, Idaho; and Ketchikan, Alaska, among others. In total, the THF Board Of Directors awarded $115,000 to eleven projects in ten States, contributing to the more than $4.4-million the foundation has invested in skatepark projects since 2002.

In addition to Skatepark Grants, the Tony Hawk Foundation provides Technical Assistance to help communities work through the process of developing quality, concrete public skateparks. So, along with the cash to help them build their parks, the newest THF Grant Recipients can also look forward to practical help in working through the remaining stages of their projects.

“I don’t want to oversimplify the problems our city faces,” said Detroit’s Mitch Cope. “But having this kind of support for a project we believe has the potential to be transformational is huge—for the community and the city as a whole.”

ABOUT THE TONY HAWK FOUNDATION
A charitable, non-profit organization, the Tony Hawk Foundation was established in 2002 by its namesake, professional skateboarder Tony Hawk, to promote and provide funds for high-quality public skateparks in low-income areas throughout the United States—with an emphasis on the word “quality.” Since then, the Foundation has awarded $4,429,000 to 529 communities in all 50 States. The Foundation focuses on working with local officials and grassroots, community-based organizations that plan to hire designers and contractors with strong experience designing and building skateparks.

The Tony Hawk Foundation was established by a gift from Tony Hawk. Its directors raise additional funds through events, donations, and continuing contributions from Tony and other entities. In addition to skateparks, the Foundation also makes donations to other children-related charities, as chosen by its Board Of Directors. For more information or to make a donation, visit the Foundation’s Web site at www.skatepark.org. You can also visit THF on facebook at www.facebook.com/tonyhawkfoundation, on Pinterest and Twitter @THawkFoundation, and on Instagram @tonyhawkfoundation.