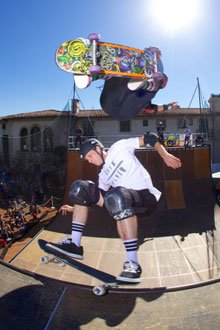 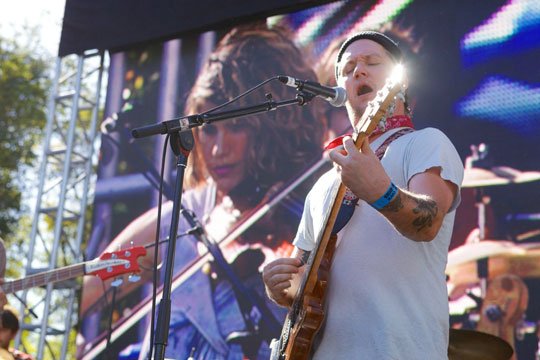 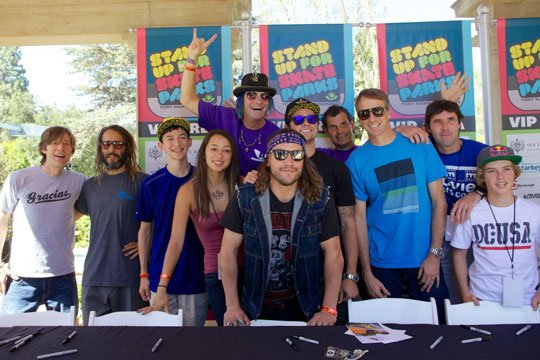 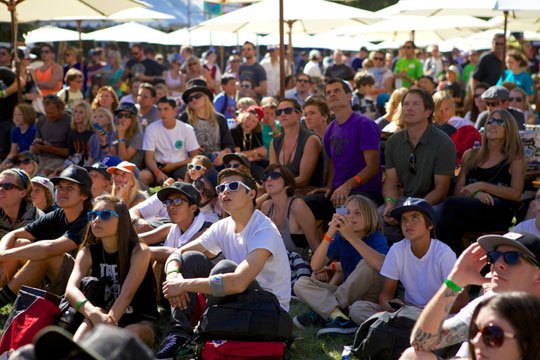 Los Angeles, CA (October 9, 2013) – It was just over 90 degrees in Los Angeles, but that didn’t stop the throngs from coming out to celebrate the 10th Annual Tony Hawk’s Stand Up For Skateparks Benefit Presented by SLS Hotel & Casino Las Vegas on Saturday at the Green Acres Estate in Beverly Hills. Heating up the day was the Vert Demo, where a crowd of 1,000 watched as action-sports luminaries Tony Hawk, Andy Macdonald, Tom Schaar, Elliot Sloan, Kevin Staab, Mitchie Brusco, Lizzie Armanto, and BMXer Coco Zurita performed an X Games-style demo on Tony’s personal ramp. The excitement of the Vert Demo was followed by a sizzling live musical performance by Grammy nominee Modest Mouse.

Tony Hawk’s Stand Up For Skateparks is a family-friendly event, which began in 2004 with a mission to raise funds to help empower at-risk youth through the creation of free, quality public skateparks in low-income communities across the U.S. In the past decade, the Tony Hawk Foundation has helped fund 537 skateparks in all 50 states, and provided technical assistance to over 2,000 community-skatepark projects throughout the world.

With a decade of successful events under its belt, this year’s Tony Hawk’s Stand Up For Skateparks raised $860,000, including $20,000 to help complete a skatepark in Detroit, Michigan.

“Ten years ago, we started Stand Up For Skateparks in a bowling alley for an event that was attended by a few hundred people and was mostly met with curiosity,” said Tony Hawk. “Today, I am honored and humbled to see how the event has grown. It has become a staple for top-notch sponsors, celebrities, and athletes who support the Foundation’s mission to provide free, quality skateparks in low-income communities. Their support brings awareness to the need for positive outlets for kids in these communities, and it truly makes a difference. I am beyond grateful.”

Tony Hawk Foundation
A charitable, non-profit organization, the Tony Hawk Foundation was established in 2002 by its namesake, professional skateboarder Tony Hawk. THF promotes and provides technical assistance and funds for high-quality public skateparks in low-income areas throughout the United States that promote healthy, active lifestyles. To-date, the Foundation has awarded over $4.5-million to 537 communities in all 50 states. The Foundation focuses on working with local officials and grassroots, community-based organizations that plan to hire designers and contractors with strong experience designing and building skateparks.

The Tony Hawk Foundation was established by a gift from Tony Hawk. Its directors raise additional funds through events, industry donations, and continuing contributions from Tony and other entities. In addition to skateparks, the Foundation also makes donations to other children-related charities, as chosen by its Board of Directors. For more information or to make a donation, visit the Foundation’s Web site at https://skatepark.org. You can also visit THF on facebook at www.facebook.com/tonyhawkfoundation, on Twitter @THawkFoundation, and on Instagram @tonyhawkfoundation.

sbe
sbe is a creative hospitality company that develops, manages and operates award-winning hotels, restaurants and nightlife. Through exclusive partnerships with cultural visionaries, sbe is dedicated to delivering the best in design, culinary and entertainment. Already a proven leader in the hospitality and real estate industries, sbe has over 80 properties currently operating or in development, and has expanded several of its flagship brands including SLS Hotels, Katsuya by Starck, The Bazaar by José Andrés and Hyde Lounge nationally and internationally. Founded in 2002 by Chairman and CEO Sam Nazarian, sbe is a privately held company. More information about sbe can be obtained at sbe.com, or by downloading the sbe App.