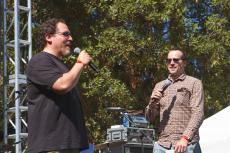 10/6/12 (Los Angeles, CA) – To the crowd’s delight, skateboarding legends Tony Hawk, Andy Macdonald, Kevin Staab, Mitchie Brusco, Lyn-Z Adams Hawkins Pastrana, Lincoln Ueda, and BMX icons Jamie Bestwick and Mat Hoffman took command of the Vert Demo with an aerial display the 1,000 guests will not soon forget. Fueling the energy and excitement during the Vert Demo was DJ Z-Trip, whose performance seemed to only take the athletes to greater heights. Following the Vert Demo was a special live musical performance by the platinum-selling alternative-rock band, Jimmy Eat World. The action-packed event all came together in an effort to raise funds to build free, quality public skateparks for youth in low-income communities.

The Tony Hawk Foundation put on yet another entertaining, star-studded event, including some of the biggest names in entertainment and action sports. The Tony Hawk’s Pro Skater HD Presents Stand Up For Skateparks benefit was held at the Green Acres Estate in sunny Beverly Hills, California on Sunday. The family-friendly event, now in its ninth year, raised $979,000, including $27,000 to help build a skatepark in the Los Angeles community of San Pedro, where youth have rallied around the project.

“Every year we try to make the Stand Up For Skateparks event bigger and better while raising funds for the Foundation, and we definitely accomplished that this year more than ever,” said Tony Hawk. “It is always refreshing to see the enthusiasm from top athletes, celebrities, sponsors and attendees who support the Foundation’s mission to provide free, quality skateparks in low-income communities. It makes a tremendous impact in kids’ lives, and I am truly grateful for their support.” 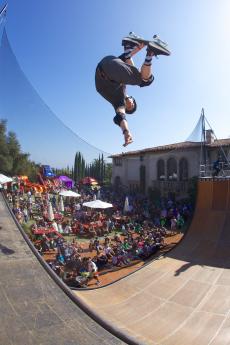 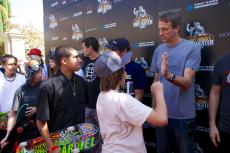 The Tony Hawk Foundation launched its Stand Up For Skateparks fundraiser in 2004 with a mission to help empower at-risk youth through the creation of free, quality, public skateparks in low-income communities across the U.S. The organization just celebrated the funding of over 500 skateparks. Tony Hawk’s Pro Skater HD Presents Stand Up For Skateparks was made successful through the generosity and support of Tony Hawk’s Pro Skater HD, Bravo Sports, Dynacraft, Kohl’s, Mondrian Los Angeles, Nixon, olloclip, Quiksilver Foundation, SIGG, Sweetwater Video, The Yucaipa Companies, and RIDE Channel (a 24-hour channel devoted to skateboarding and its lifestyle, produced by 900 Films in partnership with YouTube).

VIDEO: See how support from the Tony Hawk Foundation has enriched the lives of youth in Long Beach, California/

Tony Hawk Foundation
A charitable, non-profit organization, the Tony Hawk Foundation was established in 2002 by its namesake, professional skateboarder Tony Hawk, to promote and provide funds for high-quality public skateparks in low-income areas throughout the United States—with an emphasis on the word “quality.” Since then, the Foundation has awarded over $4-million to 512 communities in all 50 states. The Foundation focuses on working with local officials and grassroots, community-based organizations that plan to hire designers and contractors with strong experience designing and building skateparks.

The Tony Hawk Foundation was established by a gift from Tony Hawk. Its directors raise additional funds through events, industry donations, and continuing contributions from Tony and other entities. In addition to skateparks, the Foundation also makes donations to other children-related charities, as chosen by its Board of Directors. For more information or to make a donation, visit the Foundation’s Web site at www.skatepark.org. You can also visit THF on facebook at www.facebook.com/tonyhawkfoundation, on Twitter @THawkFoundation, and on Instagram @tonyhawkfoundation.