From Chicago to Cambodia, THF seeks to enrich the lives of youth through skateboarding. 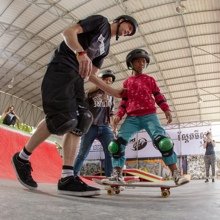 Oceanside, CA (February 26, 2014) – The Tony Hawk Foundation Board Of Directors has announced the nonprofit organization’s latest skatepark grant awards, plus a new initiative to expand its International work through a $100,000 commitment to Skateistan, the youth empowerment and educational program in Afghanistan, Cambodia, and South Africa.

Since its founding in 2002, THF has provided critical Technical Assistance to skatepark projects around the world. Annually, up to fifteen percent of THF’s skatepark-advisory work has benefited projects outside the U.S. Skateparks throughout Europe, Asia, South America, Australia, Africa, and even Siberia have received Technical Assistance from THF, but until now grant funding has been limited to skatepark projects in the U.S.

Through a partnership with Skateistan (www.skateistan.org), THF will more directly impact the lives of some of the world’s most vulnerable youth, who benefit daily from the education, exercise, and counseling services they experience at Skateistan’s facilities in Kabul and Mazar-e-Sharif, Afghanistan; Phnom Penh, Cambodia; and soon in Johannesburg, South Africa.

“It’s a huge honor for Skateistan to have the official support of the Tony Hawk Foundation, which is a pioneer in putting skateboarding on the youth-development agenda,” said Skateistan Founder and Executive Director Oliver Percovich. “This grant will allow hundreds of children weekly to access skateboarding-based educational programs in Phnom Penh, Cambodia and at our brand new project in Johannesburg, South Africa.”

During a recent visit to Skateistan in Phnom Penh, Tony Hawk skated with the students and experienced the program first-hand: “Meeting those youth and seeing how the curriculum engaged and inspired them confirmed what I already knew—that skateboarding is a universal force for good in the lives of youth. It’s a privilege to be able to support Skateistan, and I look forward to seeing the program have a similar impact in Johannesburg.”

U.S. skatepark development remains a cornerstone of THF’s mission. Domestically, the THF Board also awarded $60,000 in grants to help fund the construction of free, public skateparks in eight communities, including a high-profile project on a former industrial site in Chicago’s South Lawndale neighborhood. The 12,000-square-foot skate plaza earned THF’s top grant of $25,000, and promises to become the Windy City’s premiere skate destination.

“We’re proud to support a modern landmark skate plaza in Chicago,” said Tony Hawk. “The youth of the South Lawndale neighborhood will benefit from having their own world-class skate facility, and from the camaraderie and community they build there.”

The Chicago Park Department received a $25,000 grant from the Tony Hawk Foundation to help create this skate plaza for the youth of the South Lawndale community.

The THF Board also allocated funds previously designated for skatepark projects in San Diego, California to two projects in Hawk’s hometown. Highly anticipated skatepark projects in the City Heights and Linda Vista communities will receive $40,000 each to help bring the benefits of public skateparks to their youth. The Mid-City CAN and Friends Of Linda Vista Skatepark advocacy groups have been working with THF staff to develop their projects for the past two years, and have conducted exemplary campaigns to build community support for their respective skateparks.

The next opportunity for U.S. skatepark projects to apply for a Tony Hawk Foundation grant begins May 14, 2014. For more information about eligibility, visit the foundation’s Web site at www.skatepark.org. Public-skatepark advocates are also encouraged to review THF’s skatepark-development information, and to order a free copy of the Public Skatepark Development Guide from www.publicskateparkguide.org.

Tony Hawk Foundation
A charitable, non-profit organization, the Tony Hawk Foundation was established in 2002 by its namesake, professional skateboarder Tony Hawk. THF promotes and provides technical assistance and funds for high-quality public skateparks in low-income areas throughout the United States that promote healthy, active lifestyles, and to International programs that enrich the lives of youth through skateboarding.

Domestically, the Foundation’s Skatepark Grant program has awarded over $5.1-million to 544 communities in all 50 states. The Foundation focuses on working with local officials and grassroots, community-based organizations that plan to hire designers and contractors with strong experience designing and building skateparks.

The Foundation’s International Program has provided technical support and awarded $100,000 to assist youth through the Skateistan educational programs in Afghanistan, Cambodia, and South Africa (www.skateistan.org).

The Tony Hawk Foundation was established by a gift from Tony Hawk. Its directors raise additional funds through events, industry donations, and continuing contributions from Tony and other entities. For more information or to make a donation, visit the Foundation’s Web site at www.skatepark.org. You can also visit THF on facebook and Instagram @tonyhawkfoundation, and on Twitter and Pinterest @THawkFoundation.