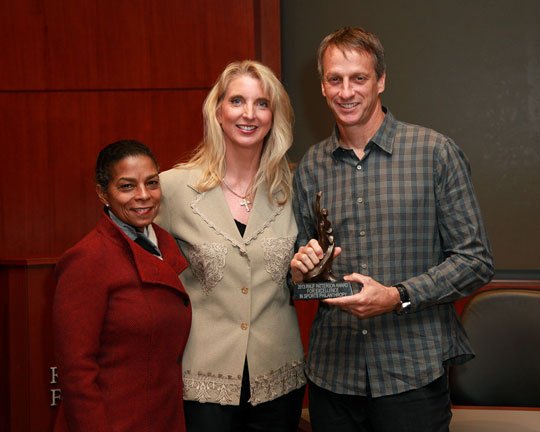 The award celebrates and promotes those in the sports world who are improving lives by leveraging the unique influence of sports. THF joins an elite list of past honorees who are unwavering in their commitment to give back to their communities, including the Philadelphia Eagles Youth Partnership (2005), San Francisco Giants Community Fund (2008), Steve Nash Foundation (2008), Red Sox Foundation (2009), Dikembe Mutombo Foundation (2010), U.S. Soccer Foundation (2010), Women’s Sports Foundation (2012), and others.

RWJF established the award in 2005 in memory of Steve Patterson, the UCLA basketball star, NBA player, and college coach who became known for his belief in and practice of using the power of sports philanthropy to make a difference. Patterson died of cancer in July 2004 at the age of 56.

The Tony Hawk Foundation was nominated for its work as the only national organization focused on empowering at-risk youth and improving disadvantaged communities through the development of public skateboard parks that promote active, healthy lifestyles. The Foundation’s work has also been a driving force in overcoming skateboarding’s negative stereotypes, which are often the cause for skaters being banned, fined, and criminalized for practicing the sport they love.

“The Tony Hawk Foundation is a powerful example of the importance of exercise in fighting childhood obesity,” said RWJF President and CEO Risa Lavizzo-Mourey, MD. “They share the mission of the Robert Wood Johnson Foundation to make our neighborhoods, cities, counties, and those who live in them, as healthy as they can be. Tony Hawk is a true leader in the effort to create a culture of health.”

“For us to receive the Steve Patterson Award is a huge validation of our years of work,” said Hawk. “It definitely gives my staff the recognition they deserve.”

Since 2002, THF has implemented youth development and leadership training, and has helped fund 537 public skateparks in all 50 states. These skateparks collectively service more than 4.6-million youth annually and represent $91-million dollars in leveraged parks-and-recreation community improvements across the U.S.

For more information about the Steve Patterson Award and past winners, please visit www.rwjf.org/patterson.

Tony Hawk Foundation
A charitable, non-profit organization, the Tony Hawk Foundation was established in 2002 by its namesake, professional skateboarder Tony Hawk, to promote and provide funds for high-quality public skateparks in low-income areas throughout the United States that promote healthy, active lifestyles. Since then, the Foundation has awarded over $4.5-million to 537 communities in all 50 states. The Foundation focuses on working with local officials and grassroots, community-based organizations that plan to hire designers and contractors with strong experience designing and building skateparks.

The Tony Hawk Foundation was established by a gift from Tony Hawk. Its directors raise additional funds through events, industry donations, and continuing contributions from Tony and other entities. In addition to skateparks, the Foundation also makes donations to other children-related charities, as chosen by its Board of Directors. For more information or to make a donation, visit the Foundation’s Web site at www.skatepark.org. You can also visit THF on facebook at www.facebook.com/tonyhawkfoundation, on Twitter @THawkFoundation, and on Instagram @tonyhawkfoundation.