Vista, CA (August 14, 2014) – The greater Pittsburgh area will soon have a world-class skateboard park, and one of the project’s benefactors also happens to be one of the world’s greatest skaters. Tony Hawk and his Birdhouse Skateboards team will visit the newly constructed Pitcher Park Memorial Skatepark on August 25, 2014 for a pre-opening performance, at the conclusion of their Midwest Birdhouse On The Road Tour. The park is expected to open to the public this Fall.

The celebration event will showcase the meticulously sculpted features of the 17,000-square-foot concrete skatepark. Built by Grindline Skateparks of Seattle, Washington, it includes a street course, bowls, and its signature 20-foot-diameter fullpipe. Pitcher Park Memorial Skatepark is the first of its kind in the Pittsburgh area, and resulted from the efforts of one mom and an army of supporters, who worked tirelessly to create a safe, sanctioned place for kids to skate.

With guidance and funding from the Tony Hawk Foundation, lead skatepark advocate Mary Pitcher launched the effort in 2008 to create a facility for local youth that would also serve as a loving memorial to her sons, Vincent and Stephen—both avid skateboarders and BMXers who drowned earlier that year.

“What began as an idea, stemming from a terrible tragedy, Pitcher Park has turned into one of the most positive and rewarding experiences of my life,” said Mary Pitcher. “People who knew my sons and complete strangers came together and worked hard toward a common goal for the children.”

Pitcher and her crew’s efforts were noticed by nearby Bridgeville native Ken Schultz, who dedicated time and more than $500,000 from the Ken & Carol Schultz Foundation to see the project through to completion. 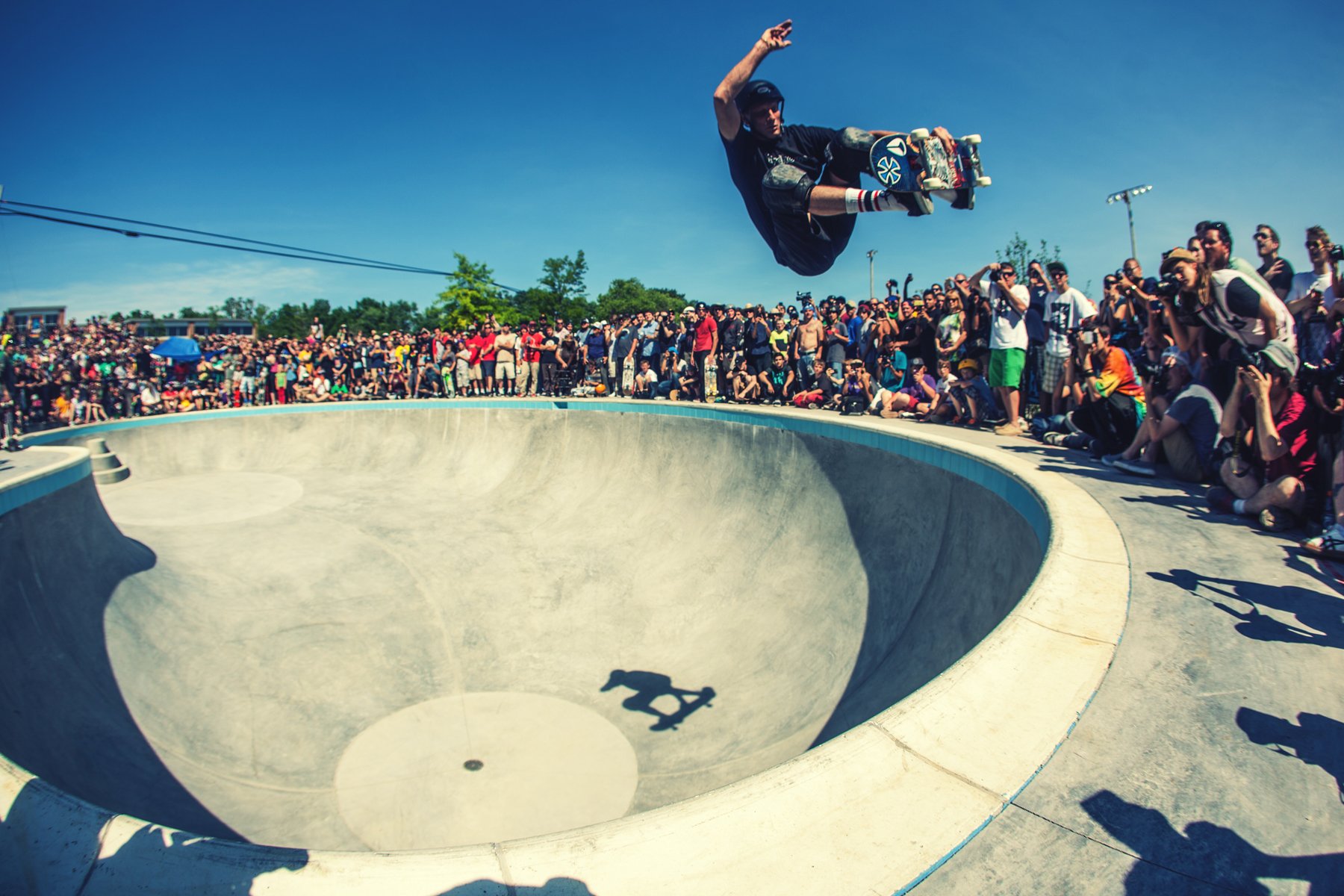 Fans packed in to the edge of the bowl during a Tony Hawk appearance at the Ann Arbor, Michigan public skatepark in June. Photo by Joe Gall

“Carol and I have supported Tony Hawk Foundation’s efforts to build safe spaces for kids to exercise and be creative for many years,” said Ken Schultz. “So we knew the impact that a world-class skatepark could have in the Pittsburgh area. After meeting Mary and seeing how the kids and the community of Carnegie completely embraced the idea, we funded this project so it could become a reality more quickly for everyone involved, and the results have been nothing short of amazing.”

The Pitcher Park Memorial Skatepark pre-opening event will feature Birdhouse team members Tony Hawk, Clint Walker, David Loy, Kevin Staab, Clive Dixon, Shawn Hale, and Shaun Gregoire. Despite concluding their grueling Midwest tour just the day before, the team is excited to visit the new park and be among the first to test its features.

“This park represents everything we at the Tony Hawk Foundation hope to see in a community skatepark,” said Tony Hawk. “Local youth involved in planning it, strong community support, and a great design that includes something for everyone. We can’t wait to skate it!”

“I am honored to have worked with the Ken & Carol Schultz Foundation, the Tony Hawk Foundation, the Borough Of Carnegie, and the many companies and people that stepped up to make this dream a reality to honor my sons,” said Pitcher. “Seeing this park come alive and anticipating the appearance by Tony Hawk and the Birdhouse team just proves that anything is possible if you don’t give up.”

While the skatepark structure is completed, surrounding landscaping and lighting to allow safe skating at night are yet to be installed. The skatepark will remain closed to the public until these tasks can be completed.

Tony Hawk Foundation
A charitable, non-profit organization, the Tony Hawk Foundation was established in 2002 by its namesake, professional skateboarder Tony Hawk. THF promotes and provides technical assistance and funds for high-quality public skateparks in low-income areas throughout the United States that promote healthy, active lifestyles, and to International programs that enrich the lives of youth through skateboarding.

Domestically, the Foundation’s Skatepark Grant program has awarded over $5.2-million to 556 communities in all 50 states. The Foundation focuses on working with local officials and grassroots, community-based organizations that plan to hire designers and contractors with strong experience designing and building skateparks.

The Foundation’s International Program has provided technical support and awarded $100,000 to assist youth through the Skateistan educational programs in Afghanistan, Cambodia, and South Africa (www.skateistan.org).

The Tony Hawk Foundation was established by a gift from Tony Hawk. Its directors raise additional funds through events, industry donations, and continuing contributions from Tony and other entities. For more information or to make a donation, visit the Foundation’s Web site at www.skatepark.org. You can also visit THF on Facebook and Instagram @tonyhawkfoundation, and on Twitter @THF.

Pitcher Park Memorial Skatepark
“Pitcher Park” is the “brain child” of Mary Shea Pitcher, and stands as a Memorial to her sons, Stephen and Vincent, who were avid skateboarders and BMXers, and drowned in the summer of 2008. For six years, Mary and the Pitcher Park Memorial Skatepark organization held fundraisers and received donations to build a skatepark that would give skateboarders and BMX riders a safe place to hone their skills. A major donation from the Ken & Carol Schultz Foundation, along with a grant from the Tony Hawk Foundation, made this dream a reality.

The Park was designed and built by Grindline Skateparks of Seattle, Washington. Grindline is a professional Skatepark Contractor owned and operated entirely by skateboarders who build world-class skateparks, nationally and internationally. This skatepark is approximately 17,000 square feet and has a fullpipe that’s 20 feet in diameter and 24 feet long, with a 6-foot-deep bowl at one end, and a large 11-foot-deep bowl at the other. The street portion has brick stamping, “Hubba” ledges, and grind rails. The park will open Fall 2014, be open to both skaters and BMX riders, and will be gifted to the Borough Of Carnegie when completed. For more information, visit www.pitcherpark.com.