11/16/12 (Los Angeles, CA) – What do pro skaters do with the boards they skate and destroy? They recruit the help of friends like Paul McCartney, Bob Dylan, Tom Petty, and Adam Yauch, and they turn them into skateparks.

Paul McCartney penned the lyrics to The Beatles’ “Blackbird” and signed Tony Hawk’s personally ridden skateboard. This and other amazing collaborations are available in the Boards + Bands auction. Photo: Miki Vuckovich

Legendary skateboarder Tony Hawk and Grammy Award-winning musician Ben Harper have invited their friends in the skate and music worlds to join them for the very special Boards + Bands project (www.BoardsAndBands.org). A member of the nonprofit Tony Hawk Foundation Board Of Directors, Harper conceived the idea to use pro skaters’ old decks to write song lyrics on and raise funds to build positive recreational outlets for at-risk youth.

These special collaboration skateboards will be available in a celebrity auction launching December 3 on eBay, and will be on display through the end of the auction at the GRAMMY Museum in downtown Los Angeles, California.

“Skating and music have always been inseparably connected on a soul level,” said Harper. “For me, listening to great music evokes the same emotional connection as watching great skating. And the feeling that comes from playing music is the same feeling I get from skating. The backbone of skating is the board—the backbone of music are the lyrics. If I had to choose between Beethoven’s piano painted by Da Vinci or Tony Hawk’s ridden skateboard with Paul McCartney’s lyrics to Blackbird … You don’t want to know which I’d choose.” 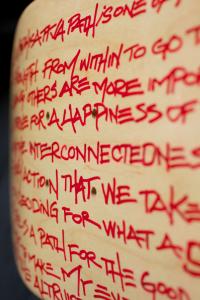 The Boards + Bands fundraising initiative merges the worlds of skateboarding and music to benefit the work of the Tony Hawk Foundation. Hawk invited a select group of professional skateboarders to donate their personally ridden skateboards and submit the name of their favorite songs. Harper then sent those boards on to the appropriate artists with one simple message: “Please write the lyrics to this skater’s favorite song on his skateboard, and we’ll use it to create more skateparks for kids.”

The chosen recording artists have hand-written the lyrics on these one-of-a-kind skateboards. Included in this unprecedented auction are board collaborations by the following artists and skaters: Adam Yauch and Bucky Lasek; Ben Harper and Rodney Mullen; Bob Dylan and Jamie Thomas; Tom Petty and Mike Vallely; Jimmy Cliff and Lance Mountain; Metallica and Steve Caballero; Ben Harper and Bob Burnquist; and Paul McCartney and Tony Hawk.

“This is literally a dream come true,” said Hawk. “When Ben first approached me with the idea, I was skeptical because the list of musicians requested was legendary. But they came through, proving that skateboarding’s reach is even broader than we imagined.”

Among the boards is a set of four decks that Adam Yauch used to meticulously stylize the lyrics to the Beastie Boys’ Bodhisattva Vow. Undergoing treatment for cancer at the time, Yauch completed the boards shortly before he passed away this Spring. 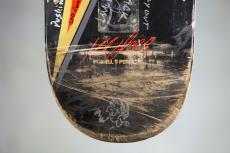 Tom Petty drew a self portrait on skate legend Mike Vallely’s board, which also includes lyrics to “I Won’t Back Down.” Photo: Jody Morris

The Boards + Bands skateboards will be on display at the GRAMMY Museum from December 3, 2012 through the close of the auction on December 13.

“We’re thrilled to partner with the Tony Hawk Foundation as the worlds of music and skateboarding continue to merge,” said Rita George, Deputy Director of the GRAMMY Museum. “The caliber of artists and skaters who are participating in the Boards + Bands project is incredible, and we’re excited to showcase their boards in our museum.”

The GRAMMY Museum is located in the L.A. Live district at 800 W. Olympic Blvd., Los Angeles, CA 90015. Museum hours, admission, and other information can be found at www.grammymuseum.org, or by calling (213) 765-6800. All of the artists participating in the Boards + Bands program are Grammy Award winners.

About The Tony Hawk Foundation
A charitable, non-profit organization, the Tony Hawk Foundation was established in 2002 by its namesake, professional skateboarder Tony Hawk, to promote and provide funds for high-quality public skateparks in low-income areas throughout the United States—with an emphasis on the word “quality.” Since then, the Foundation has awarded over $4-million to 512 communities in all 50 States. The Foundation focuses on working with local officials and grassroots, community-based organizations that plan to hire designers and contractors with strong experience designing and building skateparks.

The Tony Hawk Foundation was established by a gift from Tony Hawk. Its directors raise additional funds through events, donations, and continuing contributions from Tony and other entities. In addition to skateparks, the Foundation also makes donations to other children-related charities, as chosen by its Board Of Directors. For more information or to make a donation, visit the Foundation’s Web site at www.skatepark.org. You can also visit THF on facebook, on Twitter @THawkFoundation, on Pinterest at THawkFoundation, and on Instagram @tonyhawkfoundation.

About The GRAMMY Museum
Paying tribute to music’s rich cultural history, this one-of-a-kind, 21st-century Museum explores and celebrates the enduring legacies of all forms of music, the creative process, the art and technology of the recording process, and the history of the premier recognition of excellence in recorded music—the GRAMMY Award. The GRAMMY Museum features 30,000 square feet of interactive and multimedia exhibits located within L.A. LIVE, the downtown Los Angeles sports, entertainment and residential district. Through thought-provoking and dynamic public and educational programs and exhibits, guests can experience music from a never-before-seen insider perspective that only The GRAMMY Museum can deliver. More at www.grammymuseum.org.