While all parts of the country are skatepark-deficient, some are much farther behind the curve than most. 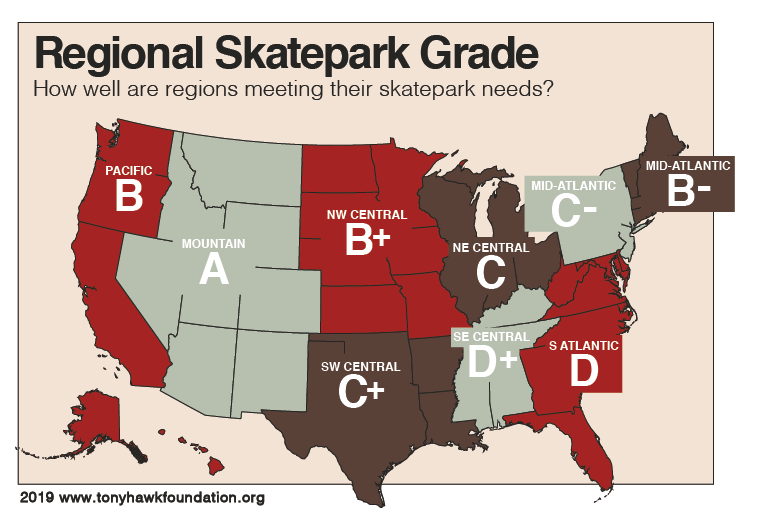 How does your region score in the skatepark tally?

Every neighborhood needs a place to skate. Many have a permanent, public skatepark, but most don’t. While many of the nation’s skateparks are small, anonymous installations, the Tony Hawk Foundation has identified about 2,800 public skateparks open today in the United States (and estimate there are about 700 more that we don’t have information about). These are free, come-and-go-as-you-please, open-air facilities for anyone to enjoy. Drop by one of these parks and you’re likely to see a few people rolling around and a bunch of others waiting their turn or hanging out. That’s what it’s about.

In communities without skateparks, people seek the next best thing; streets, plazas, sidewalks, campuses, and parking lots eventually stake their claim as the “best place to skate around here.” At some point people run out of patience and law enforcement finds itself penalizing local youth for pursuing their recreational interests in inappropriate places.

Tony Hawk Foundation staff keeps an eye on areas that have a lot of people, but not a lot of skateparks. These communities often recognize their need but lack the developmental guidance and funds to get their skatepark project started. Based on regional populations and existing skateparks, THF has given each area of the nation a “skatepark level-of-service” grade.

If you’d like to know how your area stacks up, it’s simple.

1. 50,000 Population – We know that a populations of up to 50,000 people can be served by a neighborhood skatepark (this is a general population number, not the number of skaters). Three skateparks would be appropriate for a community of 150,000 people. Divide your population by 50,000. This is the minimum number of facilities you should have.
2. One Neighborhood Skatepark – At about 10,000 square feet, this “standard” skatepark can serve about mile-and-a-half radius (or about 7 square miles). The fact that this is an attraction for wheeled users means it can serve a wider area than one that would draw pedestrians. This is the anchor facility for a service population of 50,000 people.

Any community with more than 50,000 people will require more than one skatepark to meet their needs. They should be located in the neighborhoods that they are meant to serve. The skateparks will need to be distributed across the community to maximize the coverage and access.

The community’s total skatepark need is reduced as each new skatepark is developed in the area. For example, a community of 150,000 residents will need three skateparks and they currently have one, so they need two more. Their “need gap” is two skateparks.

There are about 325-million people in the United States that need at least 6,500 skateparks. We estimate that there are currently about 3,500 skateparks, and the nation needs 3,000 more. Nationally, our skatepark needs are about 54% met, and the need-gap is 3,000 facilities.

Regionally, we see the greatest skatepark need-gap in the southeastern states: Alabama, Kentucky, Mississippi, and Tennessee. There are similarities between national skatepark service coverage and obesity maps, and this region has struggled to meet its general recreational needs for a long time, so the lack of skateparks is no surprise.

Of the 3,007 counties in the United States, 1,900 of them have no skateparks at all. Over 59-million Americans lack access to a skatepark at a county level.

Even areas with skateparks can exhibit large need-gaps. There are a dozen or so cities in the U.S. with more than a million residents. With 31% of the nation’s population concentrated there, these communities have enormous needs for public recreation, yet their skatepark needs are only 24% met.

Here are the counties that we’re most excited to support skateparks in, based on their unmet need:

Tony Hawk Foundation relies on local volunteers to advocate and raise funds for these facilities. If you or someone you know is interested in getting involved with a public skatepark effort in your community, reach out to us (contact@skatepark.org) and we will give you everything you need to get started.

Try This At Home
Divide your local population by 50,000 and subtract the number of local public skateparks. The result is your local skatepark need. Then drop us a line and let us know what you came up with. We’ll figure out your first steps with you.